Thank you for your patience while we retrieve your images.

Visitors 1532
57 photos, 1 videos
Magoos was a unique bar in Tribeca in the seventies and eighties. Just about every person that hung out there was an artist. My apologies to those whose names I can't remember, and to those whom I never got around to photographing. I know I'm really pushing it with some of these images but I wanted to include as many regulars as possible. At the time, I thought my own photo was awful but forty plus years later I'm thinking I look pretty good. Hopefully, everyone will see it the same way. 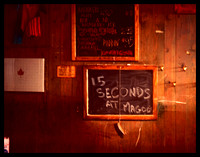 Guestbook for Magoos Bar circa 1980
December 8, 1980(non-registered)
I was having dinner at Magoo's on the evening when John Lennon was shot. I remember I had the $9.99 Blue plate special which was a steak. I didn't know about the shooting until a little while later when I walked up to Central Falls on West Broadway and made a phone call from a payphone in the back to a friend was working at Loeb Student Center at NYU. Didn't sleep that night, fortunately had some friends to hang out with. Every year on this day I think of Magoo's.
Kate Lynch(non-registered)
Hi Ken, can I ask you about these photos? My mom Sharon is in one of them and I'd love to use one for a little list piece I'm writing on Medium. Let me know?
rich(non-registered)
I remember Magoo's when it opened in the mid sixties ..It was unique in the had two entrances on two different streets....I was employed across the street at AT&T …...Limousines with fancy male patrons would exit and go in one door of Magoo"s Taxi's would drop off beautiful women in high fashion at other entrance …..This was at the beginning of SOHO when most of the was lofts used by the garment industry of food industry....It was a quiet part of Manhattan after dark (rats abounded in the dark street and alley ways)….I think Magoo's was a pick-up joint for well-healed johns and politicos......Saw many limos leave with beautiful women on arm of older male .....This was before Trump had a drivers license and Stormy Daniels was an unconceived Angel......rich
Shane M(non-registered)
Around 1978, I used to visit NYC from England to stay with my friend's dad, who was an artist. We used to eat at a place called Magoos and I wonder is this is the place? I was 7 or 8 years old and don't remember where it was but I do remember the hamburgers which came in a pitta-style flat bread.
When I cook these for my family I call them Magoo's burgers.
Is this the same place? I'd love to know. Drop me a mail m.avacado[at]hotmail.com
Great memories of my summers in NYC! Thanks for the pics, certainly looks like the place.
Shane
John Radulovic(non-registered)
Ken, nice work. Magoo’s was definately a great place. Learned a lot about my friends, myself, and life itself. From the crindgy to the wonderful bits. Personally, I have never found another place like Magoo’s and I doubt I ever will. To my mind the current bar seen has become a performance place, somehow Magoo’s was like being back stage, a safe inviting place to go. I have missed many, regretted some, and above all, sorry to hear about Pandy, way to young. Tommy was a truly decent man and he will be missed. I am pretty sure Magoo’s was a manifstation of Tommy’s will/heart/ personality I hope the last leg of his jouney was a comfortable one. Cheers one and all.
The guestbook is empty.
Loading...
© Ken Nadle
Powered by ZENFOLIO User Agreement
Cancel
Continue